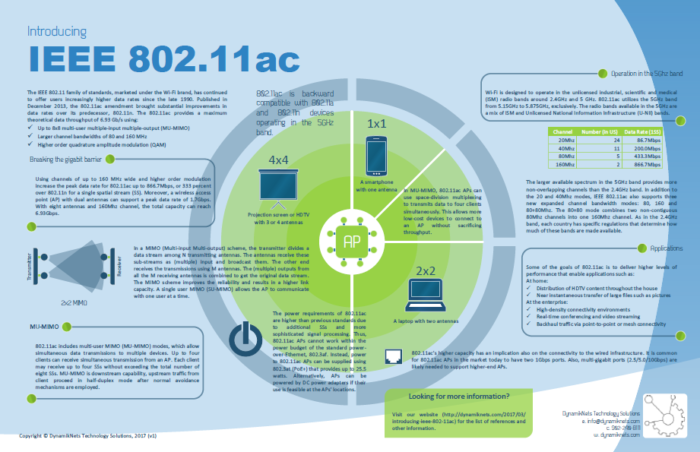 The IEEE 802.11 family of standards, marketed under the Wi-Fi brand, has continued to offer users increasingly higher data rates since the late 1990. Published in December 2013, the 802.11ac amendment brought substantial improvements in data rates over its predecessor, 802.11n. The 802.11ac provides a maximum theoretical data throughput of 6.93 Gb/s using:

Using channels of up to 160 MHz wide and higher order modulation increase the peak data rate for 802.11ac up to 866.7Mbps, or 333 percent over 802.11n for a single spatial stream (SS). Moreover, a wireless access point (AP) with dual antennas can support a peak data rate of 1.7Gbps. With 8 antennas and 160Mhz channel, the total capacity can reach 6.93Gbps.

Operation in the 5GHz band

Wi-Fi is designed to operate in the unlicensed industrial, scientific and medical (ISM) radio bands around 2.4GHz and 5 GHz. 802.11ac utilizes the 5GHz band from 5.15GHz to 5.875GHz, exclusively. The radio bands available in the 5GHz are a mix of ISM and Unlicensed National Information Infrastructure (U-NII) bands.

The larger available spectrum in the 5 GHz band provides more non-overlapping channels than the 2.4GHz band. In addition to the 20 and 40Mhz modes, IEEE 802.11ac also supports three new expanded channel bandwidth modes: 80, 160 and 80+80Mhz. The 80+80 mode combines two non-contiguous 80Mhz channels into one 160Mhz channel. As in the 2.4GHz band, each country has specific regulations that determine how much of these bands are made available.

In a MIMO (Multi-input Multi-output) scheme, the transmitter divides a data stream among N transmitting antennas. The antennas receive these sub-streams as (multiple) input and broadcast them. The other end receives the transmissions using M antennas. The (multiple) outputs from all the M receiving antennas is combined to get the original data stream. The MIMO scheme improves the reliability and results in a higher link capacity. A single user MIMO (SU-MIMO) allows the AP to communicate with one user at a time.

802.11ac includes MU-MIMO modes, which allow simultaneous data transmissions to multiple devices using space-division multiplexing (SDM). Up to four clients can receive simultaneous transmission from an AP. Each client may receive up to four SSs without exceeding the total number of eight SSs. MU-MIMO is downstream capability, upstream traffic from client proceed in half-duplex mode after normal avoidance mechanisms are employed.

With SU-MIMO, adding more stations with fewer antennas to an AP increases contention and degrades performance. In contrast, MU-MIMO allows more low-cost devices to connect to an 802.11ac AP without sacrificing throughput.

The power requirements of 802.11ac are higher than previous standards due to additional SSs and more sophisticated signal processing. Thus, 802.11ac APs cannot work within the power budget of the standard power-over-Ethernet, 802.3af. Instead, power to 802.11ac APs can be supplied using 802.3at (PoE+) that provides up to 25.5 watts. Alternatively, APs can be powered by DC power adapters if their use is feasible at the APs’ locations.

The higher capacity has an implication also on the connectivity to the wired infrastructure. It is common for 802.11ac APs in the market today to have two 1Gbps ports. Also, multi-gigabit ports (2.5/5.0/10Gbps) are likely needed to support higher-end APs.

Higher spectrum band generally means shorter range and smaller coverage area. That is because 5GHz signals attenuate faster than 2.4GHz signals do and they do not penetrate as many obstacles. However, 802.11ac can cover the same nominal range the 5Ghz 802.11n.

Some of the goals of 802.11ac is to deliver higher levels of performance that enable applications such as: