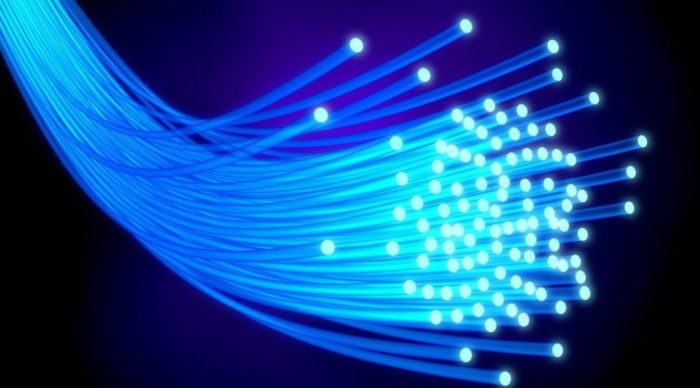 (this is the third post of the series “behind the wall”. Here are the first and second)

The Internet is made of light.

That is because the Internet’s backbone is mostly made of optical fibre links that guide light pulses representing data streams.  Optical fiber technology permits the transmission of data over longer distances and at higher rates than what is possible by wire cables. Fibres are also immune to electromagnetic interference, a common problem in other communications media.

The light that traverses an optical link is emitted by lasers in the infrared range of light wavelengths. Since light from the lasers can have a single wavelength, multiple light streams can travel through the fibre using multiple wavelengths. This technique, known as wavelength division multiplexing (WDM), allows the transmission of hundreds of gigabits of data per second.

The optical and metal cables that are used to construct the networks of the Internet, the mechanical connectors needed to bond them together, and all related specifications, are known as the physical layer. This layer is the first of seven-layer model (known as the OSI model) that the experts in the field use to study and build networks. The technologies responsible for moving packets of data across the Internet links are known as Link layer technologies.

Several technologies have been used to facilitate the transmission of data across the Internet including SONET, ISDN, Frame Relay, and ATM. However, the technology most prevalent in the Internet today is the Ethernet. The Ethernet was originally developed in the 1970s to connect devices in a local area network, but the technology has been modified and enhanced over the years to enable transmission of data at higher rates, for longer distances, and over various media.

The Ethernet today is used to construct the networks of small organizations or large ISPs. It may be used to connect devices in the same room or hundreds of kilometres apart. The common data transmission rates that Ethernet provides today are 100Mbps (a hundred million bits per second), 1Gbps, and 10Gbps (about three 2-hour HD movies in a second). The use of 40Gbps and 100Gbps links is also on the rise. This huge amount of data can be sent over copper wires or fibre optical cables. Although wireless technologies such as Wi-Fi are not technically Ethernet but they are based on it and use similar concepts.

For more information about the use of Ethernet technologies in the backbone see my post Connectivity with Dark Fibre and Carrier Ethernet Services.